Award winning journalists, marketing gurus and leadership experts have gathered in Bucharest for the fourth edition of the international conference The Power of Storytelling. They shared craft tips, writing advice and personal stories.
Here are the main takeaways from day one:

Jacqui Banaszynski opened by talking about the importance of using all of our senses when reporting.

„Senses are a very important part of the way we report. A recent study says that only 25% of the way we communicate as human beings come from how we speak. Body language, tone of voice, how we move, it’s the things we don’t say when we speak, the stuff that exists between the silences.

As a result, when we do this work, we have to pay attention to our senses, not just to the sense of sound, but the sense of sight, of touch, of taste, of smell. And the most important one, the sixth sense: emotion. Emotional intelligence. That part of yourself that is uniquely human.”

‘Interviewing is a full body sport. A total emerging event’ – Banaszynski on senses at #story14

Jacqui: Hold the baby. Let yourself feel what the people you write about feel #Story14 — Luiza Ilie (@LuizaIlie) October 17, 2014

Leigh Hafrey then talked about the use of stories for business.

The best business stories, he said, anchor us in the here and now, transcend boundaries by helping us understand and apply what we read to the world we would like to create, and they let us articulate short term solutions. Every time you go back to them, you learn something new, they keep you from making bad decisions.

In order to lead #business, you have to recognize what it means to lead in public sector. Leigh Hafrey at #Story14 pic.twitter.com/tMKM5TPKEe

**
Kelley Benham French deconstructed the amazing story of the birth of her premature daughter. She talked about how she decided to write about it as a first person story, although at first she wanted to do an explanatory piece, she revealed how she came to terms with the idea that she was going to be the main character, and how she reported it like she would have reported a story about anybody else.

I did not want to make a personal story. And when I proposed it, I said “this is a science story,” @KelleyBFrench recounts. — The Power of Story (@pofstorytelling) October 17, 2014

**
Jonah Sachs made a convincing case of how we can push for change in the world by telling better stories. He also shared four lessons:

Amy O’Leary talked about the changes storytelling, and journalism in general, is going through, and how can content creators reach their audiences nowadays.

In the past, news was coming at you, she said: “We printed it out on paper, loaded it on trucks, and some little boys on bicycles would go to your house and throw the news at you. They literally threw it to your house.

Today we put them in the most crowded place in the human history, the internet, and then we expect you to come to our website to find it.”

At the New York Times they are experimenting with new ways of starting their stories. Amy gave four pieces of advice:

Wendell Steavenson, a writer for The New Yorker and Prospect Magazine, was our surprise speaker. She replaced Lea Thau, who unfortuately had to cancel due to a health issue. Wendell talked about the lines between fiction writing and nonfiction narrative. „Storytelling can be whatever you want it to be, as long as the reader knows where the line is between reality and imagination.”

“Good stories are hard to find. Why do you think magazines are full of famous people?”, great truth from Wendell Steavenson #Story14 — Gabi Dobre (@gabi_dobre) October 17, 2014

Lisa Pollak explained the reporting process behind the John Smith episode of This American Life.

She offered a few examples of questions she would ask while searching for the right subjects:

In the closing keynote, Chris Jones gave an epic and emotional talk on fear in the creative process.

The thing that you constantly live in a writer`s life is fear. It is always there. @MySecondEmpire at #Story14 pic.twitter.com/Rsvgdy8CvL — The Power of Story (@pofstorytelling) October 17, 2014

He then offered some antidotes of overcoming it:

“You sit down and you do the work. And you do it again and again until you get enough evidence that you can do it.

What you earn if you do that work is confidence, and confidence is something you can see in a story.

For writers, confidence is won, more than anywhere else, alone in the chair.

The way to handle fear is through the gradual assimilation of discipline. Step by step.

You won’t always be great. But you’re giving yourself the chance to be good.”

He then closed his talk with this amazing video of Maurice Sendak: 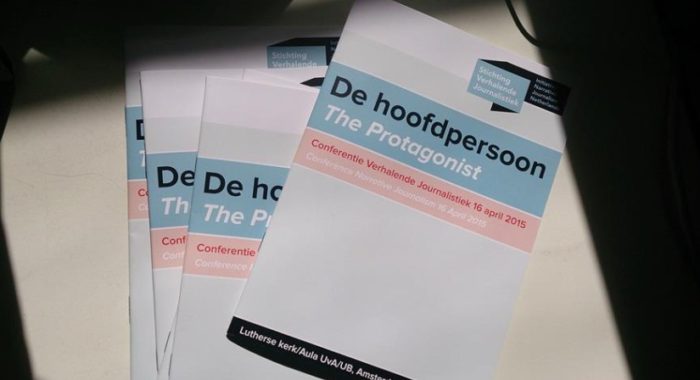 Takeaways from the Conference

What we learned from the fifth annual Narrative Conference in Amsterdam.
August 2, 2014

Reporter and radio producer Lisa Pollak talked to us about the elements of a good story, what makes radio storytell...