What we learned from Debbie Millman’s inspiring talk on overcoming rejection at the National Theatre Bucharest on August 7.

We’re still in awe after Debbie Millman’s talk Monday night at the National Theatre Bucharest, where we had the largest audience ever for a The Power of Storytelling event and definitely the longest autograph queue. This is all thanks to the wonderful Debbie Millman, who delivered an inspiring talk about starting out in the creative industries, facing numerous rejections and harsh criticism, making the best out of a painful situation, and her advice for young professionals. Debbie, who is an accomplished interviewer as the host of Design Matters, shared one of her favorite questions to ask her guests in the early years of the podcast: what did you want to be when you were growing up? She said this was because whenever she asked little children this question their answers left her discouraged – most of them said they wanted to be “famous”.

“It made me discouraged for the generations of tomorrow until I met a young woman. She looked me straight in the eye and said: everything,” Debbie explained as she spoke about her creative path in life.

After sharing details about her incredible life story, Debbie left us with a few things she learned along the way – the hard way, as she says.

“We’re living in a 140 character culture. People expect that you are going to do something and be successful right away, and if you’re not, then you might as well give up. And in a lot of ways, I did, I kept giving up thing after thing, but I kept pushing forward with something. If you want to do something badly enough, keep trying.”

2. Anything worthwhile takes a long time.

“Anomalies are the people that make it in their 20s and 30s. For most people it takes at least 10 years to get really great at something. And the longer it takes, I truly believe not only the longer it will last, because you’re much more mature. But the more grateful you will be and the less you will take it for granted. Because everything will feel like a gift. It’s taken me 34 years to get right here, right now. I’m cool with that.”

3. Make time for the things you want to do.

“A lot of people have asked me how I do the different things that I do at the same time. And they ask me if I sleep. I do, I’m a sleepaholic, I love sleeping. I’ve decided that if you tell yourself that you’re too busy to do something, my suspicion is that you probably don’t want to do it badly enough. Because if you really want to do it, you don’t find time, you make time.” 5. If you are waiting for confidence to do something, you will wait forever.

“I did a show with Dani Shapiro, the writer, last year and after we were talking about confidence, and I asked her how does she feel about confidence. And she said that she felt confidence was overrated, and what was much more important than confidence was courage. The courage to take the first step when you don’t know if you’re going to be good at it or not. But what is confidence? How do you manifest confidence? You manifest it after you take that first step, that courageous first step. Because confidence actually is the repetitive success of any endeavor. If you are waiting for confidence to do something, you will wait forever. You have to do it first.”

7. You can’t not take rejection personally.

“I don’t believe people who say “It’s business, don’t take it personally”. Business is personal and personal is business. You are going to feel bad, but let yourself feel bad. Because humans metabolize emotions fairly quickly. If you feel terrible, you feel feel terrible, but it’s not going to last, time will help to alleviate the pain and you will continue. I once had a student who said he was afraid to go after what he wanted because he felt if he did it and he was rejected, that he would die of heartbreak. And I said: “No, you will get over the rejection. What you will die of is regret. So chose what do you want to die of: regret or rejection?” I think regret is way worse.”

8. You have to work harder than everybody else.

“I’m preparing for some interviews in the next week with some of the older, retired Pentagram partners, and I watched a video with Sir Kenneth Grange, and he was asked this same question and he said: My advice for anyone starting out is to work 80 hours a week.”

“Coding is something that we learn in elementary school, along with reading. That’s how important it is going to be. Designers are expected to know everything now.”

Come see one of the most influential designers and storytellers working today on Monday, August 7, in Bucharest.
July 4, 2016 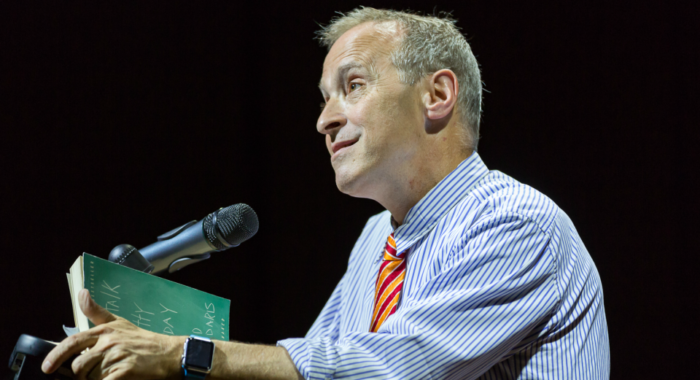 David Sedaris on keeping a diary and what informs his writing: fucked up human behaviour, racial relations in Ameri...