An unlikely Midwesterner with a passion for basketball became the universal BFF to the contemporary writer. And a poet.

The universal BFF to the contemporary writer – as he was penned by LA Review of Books following his bestseller How to Read a Novelist -, John Freeman came late to reading. His summers growing up in Ohio were spent on the basketball court, not with his nose in books. The literary bug caught him years later, after graduating Swarthmore College and moving to New York. He walked into a bookstore one day and found a first edition of William S. Borrough’s Naked Lunch with the original jacket. John had written his thesis at university about Jack Kerouac and he was a fan of the Beats, so this made a big impression on him. He couldn’t buy the book because it was too expensive, but he’s definitely made up for it since. “That was like a whole other education – going to bookshops,” Freeman believes.

After working in publishing for a while, he became a book critic. Years later, as president of the National Book Critics Circle, he led a campaign to keep book coverage as a vital part of the American print media. “I’m sentimental about paperbacks. My favourite bookstore in the world is City Lights in San Francisco, the first all-paperback bookstore in the United States,” the author wrote in Granta magazine, after assuming the role of editor. Since then, he’s moved on to publishing his own literary biannual, Freeman’s, which launches this October.

John started research on How to Read a Novelist, a collection of profiles on the world’s literary superstars – people like Doris Lessing, Haruki Murakami, Salman Rushdie, David Foster Wallace and about 50 more – in the early 2000s. He got the idea while working on another novel and encountering writer’s block. He tried reading about other authors and finding out how they dealt with the writing process, but that didn’t help. “Reading about Graham Greene’s pickled misanthropy, or John Updike’s imaginary reader east of Kansas, I didn’t want to be them. I wanted to be person who got to sit down and talk to them,” he explains. His effort took about 10 years and it paid off. “He’s exactly the kind of intermediary that contemporary writers need to get the news out to potential readers. There ought to be a hundred more like him,” the LA Review of Books wrote. How to Read a Novelist will be translated into Romanian and published this fall by Editura Vellant.

After years working in publishing, editing, writing fiction, non-fiction and hundreds of magazine articles, John Freeman’s next venture will be poetry. “The first books I ever bought were poetry books,” he recalls. Freeman already published poetry in The New Yorker, The Paris Review and The Nation, so writing a book on poetry is a nice way of coming full circle. “I’ve been writing poems the last five or six years and I think I have a collection, but I don’t know. Hopefully that’s next. And a book slightly similar to this (i.e. How to Read a Novelist), but about poetry called The Alphabet of American Poetry,” he predicted back in 2013 for Newsmax.

Here are some of john Freeman’s advice for better writing and interviewing:

1. Look at the bigger picture. “I think a writer, the best ones, can be a bridge between your inner life and the outer life of the culture. Because the novel is so much part of society and culture”, says Freeman in the same Newsmax interview.

3. Make up your mind about the important stuff. “Can you write a novel while being equivocal about whether God exists? I don’t know that you can. (…) I think what gives Philip Roth’s books their power—aside from their language and the intensity of his intelligence—is that even though he doesn’t believe in God—I don’t either, I’m not doing this as a polemic Christian—he knows he has to answer those questions in his books. Which is: if there is no afterlife, if all we have is our lifetime, what does it mean? What are the things that matter? I think the best novelists always have those really big questions in mind”, he says here.

4. Set out a specific goal when writing. “I think it’s about this mixture of achievement of what it’s meant to do and coherence. Where you feel like everything matters in the book. It’s like that moment of when you’re listening to music and even when it’s got several melodies or a complicated beat, it’s also in perfect harmony”.

5. Don’t fall asleep halfway through. “Doing the work, moving the story along, you feel the intensity wane and you have a time to doze. The [books] where you’re glued to them the whole time because they’re that intense—those are the masterpieces”.

6. You don’t need to travel the world to tap into something universal, you just need to get over yourself.  “Philip Roth has produced an amazing body of work that explores the twenty-two mile terrain encircling the GPS location of Philip Roth. But then there’s a novelist like Peter Carey, who writes a book about an illiterate bank robber in Australia, and as far as I know Peter hasn’t robbed any banks. Writers have different capacities and bandwidths. This is not to say that one approach to novel writing is better than the other, but I do think that a novelistic exploration of the self should do more, should tap into something that’s universal. I don’t know, but the moment I realized I could go through most of my life without looking in the mirror was a really wonderful experience. I love the feeling that comes over me when I’m working a lot, really busy, also when I’m reading, when I have that Emersonian invisible eye experience and I’m just this permeable intelligence that’s absorbing and seeing. And I think the self—at least our modern version of it—is so souped up on social media”.

Catch the newest issue of his literary biannual Freeman’s this October and take a look at LitHub, where John is an executive director. Then, book your place at the fifth edition of The Power of Storytelling to meet John and learn more about his work. 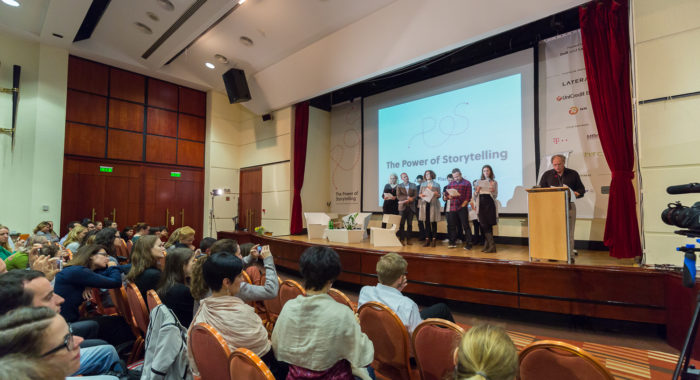 Where I’m From: The collective poem that ended #Story15

This year's conference had a special ending: a collective poem that the speakers read in front of the audience.
July 15, 2015

Curiosity has followed Robert Krulwich throughout his career, from Columbia Law School, to Award-winning television...
June 15, 2015

We asked 2011 speaker Laurie Hertzel to recommend some of her favorite nonfiction books to read this summer.