Meet 2016 speaker Carson Ellis: insights into her creative process, her charmed life on a farm and being married to The Decemberists’ Colin Meloy.

Carson Ellis, a superstar illustrator and occasional writer of children’s books, is not someone who likes a lot of responsibility and doesn’t view herself as ambitious. Despite this, she’s written and/ or illustrated a number of books for kids, including New York Times bestsellers Home, The Mysterious Benedict Society by Trenton Lee Stewart, The Composer Is Dead by Lemony Snicket, and The Wildwood Chronicles by Colin Meloy (who happens to be her husband and also a speaker at #Story16). She also designs all the artwork for The Decemberists – the awesome rock band her husband leads.

Carson lives on a farm in Oregon, USA, with Colin and their two sons, in addition to one cat, two llamas, two goats, one sheep, eight chickens, a family of barn owls and an unfathomable multitude of tree frogs. „I like it here: it’s peaceful, my kids have lots of room to roam, and the buildings are full of mysterious old stuff. Though, to be honest, I’ve never been someone who romanticized farm life much. I like wild places—woods and mountains—and ultimately I like less responsibility,” she says.

Her latest project, Home, which she also wrote, was reviewed by the New York Times as ”a delightful book” showing different kinds of homes, a short description for each one and an explanation of who lives there. „With the turn of every page, the definition of “home” broadens. We jump from a country house to a city apartment, from a wigwam to a palace, and before you know it, we are in the Old Woman’s Shoe, of nursery rhyme fame,” the reviewer writes.

Before you get to see her on stage at this year’s The Power of Storytelling conference, here’s a quick look at Carson’s artistic process and her advice to young artists:

•„I’ve drawn constantly from a young age. I’ve looked at lots of visual art over the course of my life and have taken elements from it that I like and incorporated them into what I do, both consciously and unconsciously. I draw a lot from folk art but, as a person with a painting degree, I’ll never be a folk artist. I know lots of things about art, the history of it and the context —but I’m always trying to forget those things when I’m making illustrations so I can draw like an untrained person—so I can try to stay in touch with the artist I was as a kid. I strive to make art that feels mystical—I think that informs my illustration style a lot”

•„Does the space where I make things affect the things I make? Yeah, probably. I like to work in inspiring places. They don’t have to be pretty little houses in fields on farms but it’s hard to work in places that feel soulless. 99% of the hotels I stay in, for example. But I like to draw in bars, on trains, and always en plein air.”

•„It’s pretty fascinating to be able to post something on Instagram and find out immediately whether or not people like it. And to find out how much they like it in a totally quantifiable way: a number of likes. Has there been anything else that’s functioned like this for visual artists in the past? I don’t know. Not the money value of artwork or the going rate of an illustrator. But I do think Instagram and Tumblr are interesting and new and pleasantly democratizing.”

•„I worked as a cocktail waitress and then a bartender until I was in my late twenties. So I would like to say I have great ideas and tips to help people get on a fast track to an illustration career, but I certainly don’t because if I had them, they wouldn’t have been the advice that I followed myself. If you want to do what I did, which is take your sweet time and kind of follow your heart, first of all, especially if you’re young, especially like if you just graduated from college, I would say make things really easy on yourself money-wise. Don’t put yourself on a situation where your rent is really expensive and you can’t afford it. Live as simply and as cheaply as possible. I lived in unheated warehouses when I got out of college.”

•„I think you’ve got to make that time for yourself just to be an artist if you want to do this. I think people go to college for it and sometimes they graduate and they think they’ve learned all they need to be a successful illustrator. Maybe they have. I hadn’t. When I graduated from college I still had another five years at least to just be drawing all the time before I was really hirable. I wasn’t a good artist when I graduated from college.”

Book you place at the 6th edition of The Power of Storytelling to meet Carson and be inspired by her. 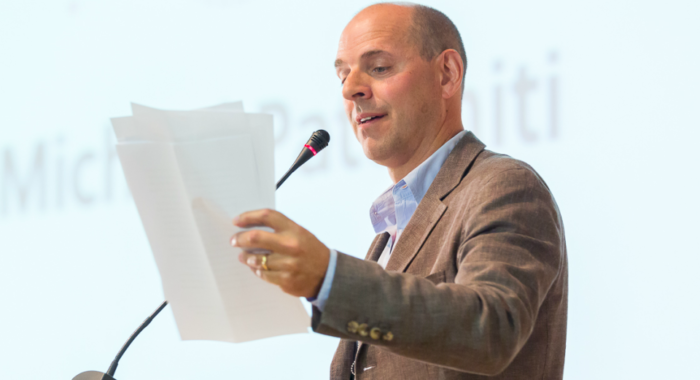 2015 speaker Michael Paterniti recommends some of his favorite books, both fiction and non-fiction, that a writer c...
July 21, 2017

Jenna Pirog is The New York Times’ first full-time virtual reality editor, so everything she does is an experimen...
July 15, 2015